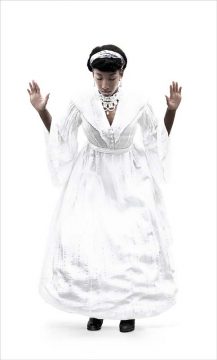 How do contemporary black women artists respond to problematic stereotypes without reinforcing them? How do they negotiate whiteness without compromising blackness? Must they all be feminists? Apologists? Activists?

Join the National Museum of African Art for a conversation with Mary Sibande, Ayana V. Jackson, Panashe Chigumadzi, and Lanisa Kitchiner to discuss how they engage politics, processes, and practices as black women artists in times of increased racial tensions. The panel will explore how they negotiate intention versus impact in creative works, how they navigate the exclusive art world, and how they use black female bodies—particularly their own—to create alternative visions of black womanhood.

Free and open to the public

Mary Sibande is a visual artist from South Africa whose work investigates personal and political histories to upend power dynamics and reveal the true power of often-overlooked women. She is one of the recipients of the museum’s 2017 African Art Award.

Ayana V. Jackson is a photographer based between France, South Africa, and the United States. Using reportage, performance, and studio-based portraiture, Jackson examines the complexities of photographic representation, the role of the camera in constructing identity, and the relationship between photographer, subject, and viewer.

Panashe Chigumadzi is a South African and Zimbabwean writer. She won the 2016 K. Sello Duiker Literary Award for her novel Sweet Medicine, and her short story “Small Deaths” was nominated for the 2016 Pushcart Literary Prize. Chigumadzi is the founding editor of Vanguard Magazine, a platform for black women in post-apartheid South Africa.

Lanisa Kitchiner, Ph.D., is an American arts administrator, academic, and director of education and scholarly initiatives at the National Museum of African Art. Her research focuses on the representation of black women in African literature, film, and visual art.