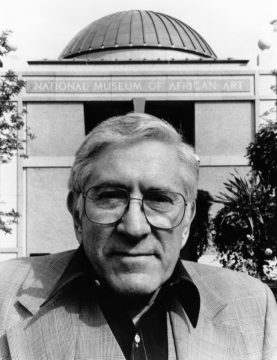 Today we remember National Museum of African Art founder Warren M. Robbins who died on Dec 4, 2008. Robbins, a U.S. State Dept diplomat established the Museum of African Art on June 3, 1964 “to foster cross cultural communications between people through education in the arts of Africa.” Our original Capitol Hill museum was located in the historic townhouse that had been the home of Frederick Douglass, the African American abolitionist and statesman.

In August 1979 the museum became part of the Smithsonian Institution.

The museum was officially renamed the National Museum of African Art in 1981, and opened to the public in a new facility on the National Mall in 1987. While it initially focused on the traditional arts of sub-Saharan Africa, over the years, NMAfA broadened its collecting scope, distinguishing itself as the first museum in the United States to include in its mission a sustained focus on modern and contemporary African art.

Through its collections, research facilities, state–of-the–art conservation laboratory, groundbreaking exhibitions, educational outreach and public programs, the museum has expanded the parameters of the field of African art history and presented to the public a rich diversity of artistic traditions from throughout the continent.

Today, the museum’s collection of over 12,000 objects represents nearly every region of the continent of Africa containing a variety of media and art forms.