“Ethiopia has need of no one, she stretches her hand unto God.”
—Emperor Menelik II, renouncing Italy’s claims to Ethiopia, 1893

Dateline: March 1, 1896. An African army wins its most resounding and lasting victory against colonialism. As morning rose to noon that day, Ethiopian forces under Emperor Menelik II defeated an invading Italian army at the Battle of Adwa. In so doing, they prevented the imposition of colonial rule. Adwa became a symbol of resistance to colonial oppression across Africa and its diaspora. Solomon Belachew—an artist renowned for depicting religious scenes—captured the ferocity of battle in the painting above/below through his use of opposing diagonal lines, suggesting action between the two opposing sides, and his depiction of blood-spattered and decapitated Italian soldiers. Consistent with artistic conventions governing Ethiopian religious painting, Belachew depicts the righteous Ethiopians as full-faced figures, while the forces of evil (the Italians, in this case) are shown largely in profile. Because the Battle of Adwa fell on March 1, St. George’s Day, the popular saint is depicted astride a horse and ready for battle as he descends from the sky. Paintings of the Battle of Adwa remain popular diplomatic gifts that the Ethiopian government has presented to visiting dignitaries and foreign diplomats stationed in the country. The message seems clear: “we remain unbowed.” 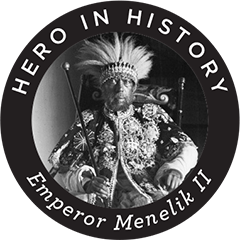 “Ethiopia has need of no one, she stretches her hand unto god."

—Emperor Menelik II, renouncing Italian claims to the country, in 1893

Christianity is deep into its second millennium as an African religion. Historically home to followers of all three major monotheistic religions—Judaism, Christianity, and Islam—Ethiopia’s Coptic Church (c. 331–340 C.E.) nevertheless predates even Rome (380 C.E.) as a state religion. This masterful 17th-century diptych icon is a highly charged devotional work, depicting multiple moments in the life of Jesus and the Holy Family. The artist, working in what is known as the Early Gondarene style, situates these figures in a world of Ethiopian references: Mary spinning thread seated on a three-legged stool, genna (Ethiopian field hockey), the style of the three yellow crowns, the lidded food basket on Salome’s head, and the depiction of the Temple in Jerusalem as a miniature Ethiopian church. Scenes depicted include: (left, from top), the Annunciation and visitation of Elizabeth (L) to Mary (R), Jesus asleep in the manger, boys playing genna, and the Magi delivering a gift to Jesus; (right, from top), Mary entering the Temple, the flight to Egypt with Joseph and Salome, the death of Mary, and Mary’s Assumption into heaven. An object of veneration and devotion, this icon partook in Ethiopia’s long, ongoing history of pious participation in the Christian world.

Heroes in History: The Nine Saints 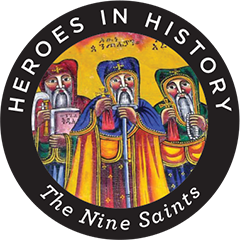 This queen’s fame stands the test of time. According to the Kebra Nagast (The Glory of the Kings), a 14th-century recounting in Ge’ez of the Ethiopian royal line, Queen Makeda, ruler of the realm, traveled to Jerusalem in the 10th century B.C.E. to witness the fabled wisdom of King Solomon. While there, she bore a son by Solomon. As a young adult, her son Menelik returned to Jerusalem to meet his father. Upon coming home, Menelik founded Ethiopia’s Solomonic dynasty (through which descent was traced until Emperor Haile Selassie’s abdication in 1974) and is credited with bringing the Ark of the Covenant to Ethiopia. The importance of Queen Makeda to Ethiopia’s history may be inversely proportional to the historically verifiable facts known about her—making her, at least, a true legend in every sense of the word.

Hero in History: Queen of Sheba 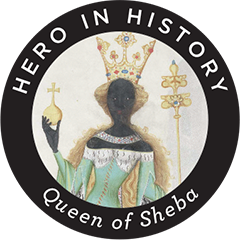 This queen’s fame stands the test of time.

“...And this Queen of the South was very beautiful in face, and her stature was superb. Her understanding and intelligence, which God had given her, were of such high character that she went to Jerusalem to hear the wisdom of Solomon. This was done by the Will of God and it was His good pleasure. Moreover, she was exceedingly rich, for God had given her glory, and riches...

—Description of the Queen of Sheba, from the Kebra Nagast
Home | That Liberty and Equality Might Yet Reign | Ethiopia—Divine Endurance | Independent Africa Faces Forward | Our Ancestors Lived Free | Legends—Looking Back, Facing Forward | We Are…: Women Warriors | South Africa—A Long Walk to Freedom