They came. They saw. They organized. Before he was globally celebrated for his works in found metal, El Anatsui first pursued sculptural forms in ceramics and found wood. He notes, “I look at textures of my work in process and I think about the texture and grain of Africa’s history; I look at the authentic colors of the different types of wood and they remind me of the real colors of history.” The Ancestors Converged Again is a relatively rare example of figurative art in wood from this Ghanaian master. Using the expressive forms of the wood he gathered, Anatsui transforms scraps into embodiments of once-distant, now-present spiritual and historical figures through minimal sculptural interventions and the process of ordering and re-ordering his sculptures. Eyes wide, taking in the troubled current moment in which they have been called together, these ancestors confer—and plan their response. 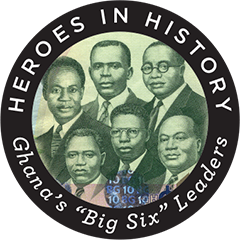 “...Unless Colonial Government is changed and a new Government of the people and their Chiefs installed at the centre immediately, the conduct of masses now completely out of control with strikes…will continue…Working Committee United Gold Coast Convention declare they are prepared and ready to take over interim Government. We ask in name of oppressed, inarticulate, misruled and misgoverned people and their Chiefs that Special Commissioner be sent out immediately to hand over Government to interim Government of Chief and People and to witness immediate calling of Constituent Assembly.”

Theirs were the inescapable voices of Egyptian possibilities. He was the voice of Egypt’s political future, the military officer who helped overthrow the monarchy, led Egypt from 1954 until his death in 1970, nationalized the Suez Canal from British and French interests, and became an icon, however fleetingly, of secular pan-Arab nationalism. At the height of the Cold War, Gamal Abdel Nasser promoted a political philosophy of nonalignment and solidarity among formerly colonized peoples. The illustrations surrounding Nasser reflect memories of his regime. Transistor radios depict Nasser's favorite method of disseminating propaganda; working women and factories, the rise of Egyptian industry; and “No Photo” signs, warnings of spies. While Nasser himself was subject to the many failings of charismatic, one-man rule, his image and voice nevertheless became an inescapable icon, in Egypt and beyond. She was perhaps his only true rival on the mid-century radio. “The Voice,” not just of Egypt, but of the entire Arab-speaking world, Om Kalsoum was one of the 20th century’s most celebrated vocal artists. Her supreme talent, musical virtuosity, and glamour made her a global celebrity, as she interpreted modern and classical Arab verse through improvisation and vocal stylization. For the artist Chant Avedissian, with an interest in the iconic images of Egyptian history, Nasser’s and Kalsoum’s pharaonic cultural influences filled his eyes—and ears. 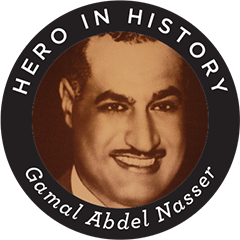 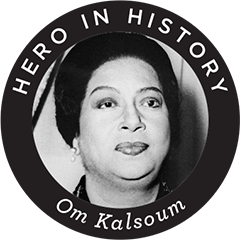 Gamal Abdel Nasser He was the indomitable voice of Egypt’s revolutionary mid-century.

“Let them kill Nasser! What is Nasser but one among many? I am alive, and even if I die, all of you are Gamal Abdel Nasser!”

—Gamal Abdel Nasser, after surviving an assassination attempt in 1954 Om Kalsoum “The Star of the East,” “Egypt’s Fourth Pyramid”—she was nothing less than The Voice.

“O Nile, you have been praised by God and celebrated in the Torah. The origin of civilisation around you is a fact, and its outcome is your virtue. It was born and you were its cradle… The people, who were privileged and protected over centuries, are thankful to you. They express their gratitude to the Lord for His creation. And may God keep on His blessings.”

He led a new generation into higher education and leadership. Tom Mboya—already accomplished, at the age of 28, as the leader of a workers’ union and for his assumption of the mantle of Kenya’s nascent independence party, the Kenya African National Union (KANU)— met with then-Senator John F. Kennedy in 1959 to promote a campaign to bring hundreds of Kenyan students to the United States for higher education. The effort already had the support of individuals like Jackie Robinson, Harry Belafonte, Sidney Poitier, and Martin Luther King, Jr. Convinced by Mboya’s vision of the need to train a new generation of post-colonial leaders, the Kennedy Family Foundation agreed to fund the early “airlifts.” Over 800 students—including future leaders like Nobel laureate Wangari Maathai—studied and traveled in the United States from 1959 until 1963, the year of Kenya’s independence. Inspired by the first airlift, Barack Obama, Sr. won a related scholarship to pursue graduate studies at the University of Hawaii in 1959. Graduating at the top of his class, he met and married American student Ann Dunham. Their son, Barack H. Obama, Jr. was born in Hawaii on August 4, 1961. 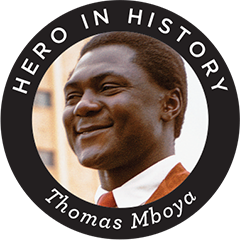 Labor leader and Pan-African visionary, he moved a generation to self-improvement and liberation.

“Pan-Africanism is changing the arbitrary and often illogical boundaries set up by the colonial powers in their mad scramble for Africa. Many…are asking us what sort of governments we hope to set up when our freedom is won…What we shall create should be…enriched by our ability to borrow…what is good from other systems, creating a synthesis of this with the best of our own systems and cultures.”

Strike a fashionable blow for freedom European traders introduced factory-printed cloths to African markets in the 19th century. Early fabrics were based on Indonesian batiks. As advancements in photographic reproduction developed, portraits began to appear on cloth. Known as “fancy” cloths, these printed textiles became very popular in the 1950s and 1960s, when many African nations attained independence, and remain important historical documents of an era filled with new possibilities. This work features the official portrait of Kwame Nkrumah, the first leader of independent Ghana. Although Nkrumah was not Asante, he chose to wear the red, yellow, and green colors—associated with both Asante kente cloth, worn widely in Ghana, and with unconquered Ethiopia—as a symbol of his leadership and pan-African pride. Due to the light sensitivity of fabric, the selections in this case will be rotated with works depicting further African independence leaders approximately every six months. 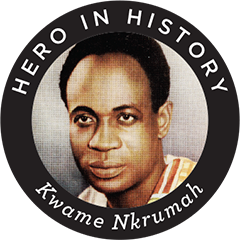 Osagyefo (“Redeemer,” in Fante), he was a symbol of independent Africa’s great expectations—and dimmed hopes.

“We face neither East nor West: we face forward.”

The fashion for Pan-African solidarity endures. Sotiba, a textile manufacturer in Dakar, Senegal, made several versions—some with gold, some without—of this fancy cloth with a photographic engraving of American activist Malcolm X. It has been suggested that this version may have been intended for the foreign market because its gold turns black when worn in Senegal’s hot, humid climate. Moreover, cloth is often bought to save—like an insurance policy or a long-term savings certificate—rather than to be cut up and worn. Due to the light sensitivity of fabric, the selections in this case will be rotated with works depicting further African independence leaders approximately every six months. 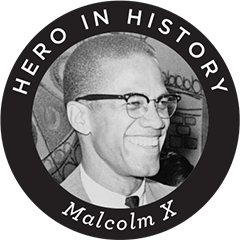 “…During the past eleven days here in the Muslim world, I have eaten from the same plate, drunk from the same glass—while praying to the same God—with fellow Muslims, whose eyes were the bluest of blue, whose hair was the blondest of blond, and whose skin was the whitest of white. And in the words and in the actions and in the deeds of the ‘white’ Muslims, I felt the same sincerity that I felt among the black African Muslims of Nigeria, Sudan, and Ghana. We were truly all the same…I could see from this, that perhaps if white Americans could accept the Oneness of God, then perhaps, too, they could accept in reality the Oneness of Man…”

She dances and sings her own truth, with poise and pride.


Ben Enwonwu is arguably one of 20th-century Africa’s most important and influential artists. Recognized worldwide for his modernist examinations of Nigerian and pan-African ideas and images by mid-century, his work came to represent African self-determination, innovation, and excellence in an era in which the continent was finally regaining its sovereignty.

The Africa Dances series, begun in 1949 as a response to performances observed in his home city of Onitsha, became a subject to which Enwonwu would return throughout his career. In the series of sculptures made between 1980 and 1984, the artist isolated each figure in space, imbuing their features with a liquid flow that captured the essence of a body in motion.

This piece is a cold-cast resin predecessor to a 1982 bronze casting of Africa Dances. Identical in form to the later bronze, the cold-cast resin version was likely cast, because of its material, by the artist himself. Enwonwu also likely painted the surface of this piece in order to understand how the light would play across its form. 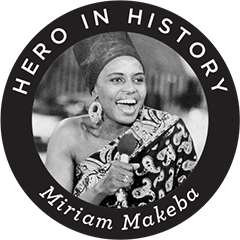 Mama Africa, she was the voice of a continent struggling for—and winning—freedom and dignity.

“I do not sing politics. I merely sing the truth.”