“Imperialism leaves behind germs of rot which we must clinically detect and remove from our land but from our minds as well.”
—Frantz Fanon, The Wretched of the Earth

They fought against the ravages of time—and won. Low-fired ceramic figures and fragments such as these have been unearthed since the 1940s at various sites throughout the Inland Niger Delta region, an area that once had highly developed cities. These works are among the earliest known surviving art forms in sub-Saharan Africa. By the 15th or 16th century, environmental and political events caused the urban centers of the Delta region to be abandoned, and the art tradition did not survive. The earliest known written reference to such figures is found in a letter of 1447. In it, a visiting Italian merchant remarked that the figures were kept in sanctuaries and venerated as representing the deified ancestors of famous founding rulers of the region. The elaborate dress of the figures suggests ceremonial military attire, and they may represent warriors who were once allies of the Malian emperor Sundiata Keita (c. 1217–1255).

Don’t cross this woman warrior. The rider wears a hat like those worn by other important persons in the Mande world, including hunters, ritual specialists, and the praise singers and historians known as griots. The portrayal of a female rider, in particular, recalls those women who acquired power and earned respect through force of character or ability as a sorcerer and are affiliated with hunters’ associations. The horse suggests the historical memory of the powerful cavalry that dominated Mali for centuries. Such staffs were displayed on special occasions to commemorate ancestors or placed near areas sacred to powerful Bamana religious groups. This sculpture was once part of a longer iron staff, likely carried by a Bamana chief. 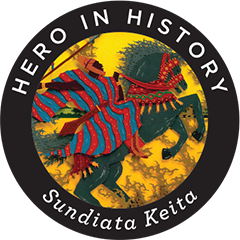 The Manding Diarra, the Lion of Mali, brought his people justice, peace, and prosperity

I salute you all, sons of Mali . . . I have come back, and as long as I breathe, Mali will never be in thrall—rather death than slavery. We will live free because our ancestors lived free.

Troubles may just ride away. Imagine the soothing surface and heft of holding these monumental miniatures in your hand. How might it feel? Kotoko artists, living in the vicinity of Lake Chad, cast small figures in copper alloy through the lost-wax technique in order to produce personal amulets. Functioning as protective amulets, they may have once been worn around an owner’s neck, or carried by hand or in a small pouch. Held close to the body, they protected their owners against threats outward, and physical, or inward, in the form of anxiety and mental illness. The image of the equestrian and archer recalls a broader history of mounted warfare and exchange throughout the greater Western Sudan—an oft-disruptive history to which Kotoko communities were often subject. 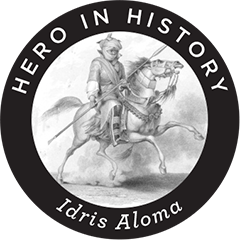 Aloma reinforced and renewed a dynasty that would rule for 1,000 years.

A lone woman clad in gold might walk [the empire’s roads] with none to fear but God.

The king has company. In the once narrow world of comic book publishing, Marvel’s King T’Challa from Black Panther appeared to stand alone as the only widely recognized African superhero in the industry. Today, however, while T’Challa has been reinvigorated by a new set of stories written by Ta-Nehisi Coates and global film releases, he also has an increasing number of continental compatriots as African comics and graphic novels flourish. Each of these works invites readers to imagine the possibilities of new, Africa-centered futures. 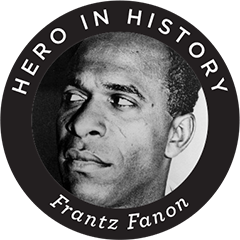 He demanded the full recognition of his humanity—and expected that his comrades do the same.

He who is reluctant to recognize me opposes me.

Imperialism leaves behind germs of rot which we must clinically detect and remove from our land but from our minds as well.

—Frantz Fanon, The Wretched of the Earth
Home | That Liberty and Equality Might Yet Reign | Ethiopia—Divine Endurance | Independent Africa Faces Forward | Our Ancestors Lived Free | Legends—Looking Back, Facing Forward | We Are…: Women Warriors | South Africa—A Long Walk to Freedom