Masks are some of the most powerful and expressive of Africa’s arts. Sculptors from several groups living in the Cross River region of southeastern Nigeria and western Cameroon produce a distinctive type of crest or helmet mask carved from wood and covered with animal skin, possibly from an antelope.

Most of the masks portray the human head, often double or multifaced, with a high degree of naturalism. They have expressive facial features, intricate linear tattoo patterns, complex spiral horn coiffures, and feather and fiber ornaments (now mostly lost). They would have been performed by dancers wearing cloth and fiber costumes.

Historical evidence suggests that the peoples of this region regard skin as a substance associated with the spirits of the dead and their animal counterparts. During the late 19th century, commerce in palm oil brought wealth and trade items to the Cross River region. Artistic activity flourished and artists created many forms of masks covered with animal skin for wealthy patrons associated with influential age-grade and men’s societies.

Although the masks covered in animal skin on view date from the late 19th and early 20th centuries and are seldom made today, masquerades remain a vibrant art form in the Cross River region and continue to be a source of research among art historians. The museum’s significant collection of animal-skin masks from this region has been studied over the past decade by a number of Smithsonian fellows. 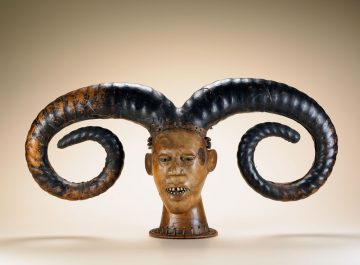 COMPARING ANIMAL-SKIN MASKS | Startling beauty. From an outsider’s perspective, the facial features of this mask covered with animal skin may appear fierce. Yet, the mask actually depicts an ideal beauty, a young woman with perfectly filed teeth and a distinctive coiffure worn to signal her readiness for marriage.
Scholar Keith Nicklin, a specialist of the masking traditions of southeastern Nigeria, speculated that this mask was the work of Etim Bassey Ekpenyong, a distinguished Efik carver also credited with a mask that appears in the movie The Wizard of Oz (1939). 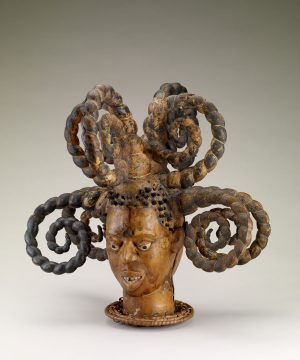 COMPARING ANIMAL-SKIN MASKS | Well-coiffed. The hairstyle of this double-faced mask may be an exaggeration of the coiffure of a young woman who has completed her coming-of-age rituals and is thus ready for marriage. Throughout the Cross River region, masks covered with animal skin were owned by men’s associations and performed at initiation rituals and funerary rites commemorating association members.