Can you find works of art that look similar? What message might connect them?

A shared style unites individual artists across space and time in a consistent, shared visual language that links figures and forms, and subject matter and motifs.

Despite working along the isolated cliffs of Mali’s Bandiagara Escarpment, Dogon artists have over the centuries been in contact with Muslim traders, French ethnographers, and more recently, multinational tourists. In the face of changing times and contacts, Dogon artists have nevertheless chosen to employ a cohesive sculptural style that includes elongated, geometric forms and sacred imagery which cross media and genres of objects such as carved figures, stools, masks, and jewelry.

DOGON STYLE | Artist from an unknown time. How old does this figure look to you? Although the Dogon peoples live along the relatively isolated Bandiagara Plateau, their art attests to the long history of interaction among various groups in the region. Carbon-14 dating of artworks from this area spans 1000 years. This sensitively carved sculpture, however, has not been scientifically dated, making its particular place within Dogon art history undetermined. Its crusty matte surface, the result of numerous offerings of millet beer, suggests it might be a shrine figure, but it could also be a fragment from a mask. 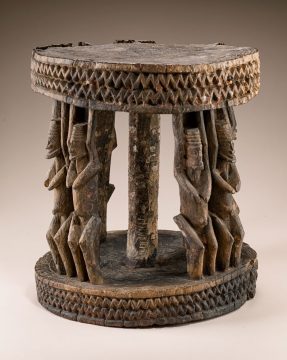 DOGON STYLE | Stellar stools. Stools play a central role in Dogon cosmology. According to legend, the world consisted of two disks forming the sky and earth. The two disks of this stool, with its unusual traces of red, white, and black pigment, are supported by figurative pairs that represent the founding Dogon ancestors as they journeyed from heaven to earth. The zigzag patterns suggest both their descent and flowing water, and refer to the symbol of Lébé, the first human and priest. Never intended as a seat, the upper disk once served as an altar for offerings.