Is there a particular artwork by a Yoruba artist that captures your attention? Why do you think that is?

The 2005 donation of the Walt Disney–Tishman African Art Collection strengthened the museum’s holdings in many areas, particularly in works made by Yoruba artists living in southwestern Nigeria and neighboring Benin. The gift included a total of 50 Yoruba artworks, some by identified artists and workshops, and it expanded the scope of the museum’s collection in all media—beadwork, ceramic, copper alloy, iron, ivory, and wood.

Such a critical mass of Yoruba artworks offers the opportunity to gain insights and to appreciate:

the diversity of Yoruba artworks within genres and materials.

the ability to study Yoruba style across form and medium.

historical depth through comparative research with Yoruba objects from other museum and private collections.

emphasize the head, and

employ these and other artistic strategies to communicate meaning. 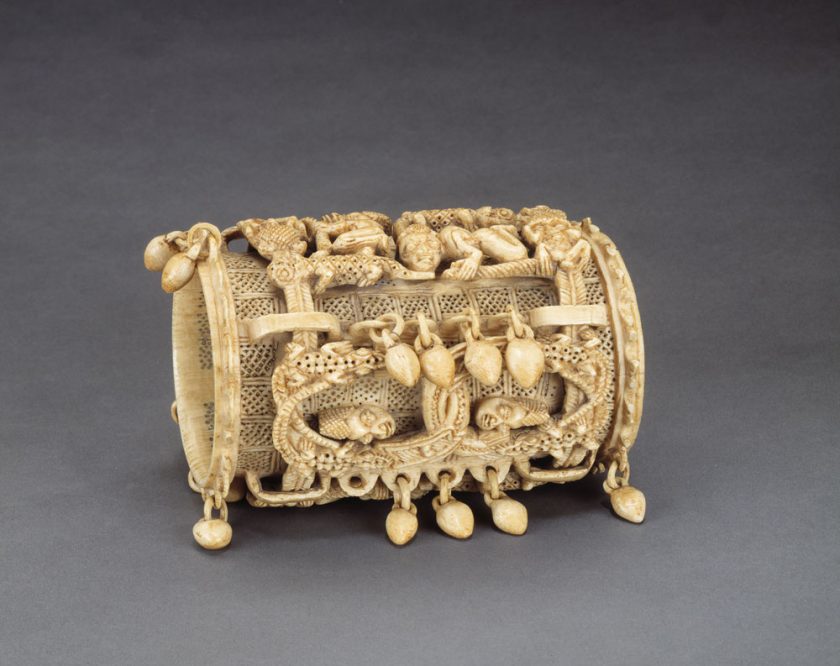 STUDYING YORUBA ART | Virtuosity visualized. The artist’s technical brilliance is evident in this extraordinary bracelet carved from one piece of ivory into two interlocking, movable layers with pendant rattles. Made for an Owo king, the motifs suggest the ruler’s extraordinary secular and sacred power.
The outer segment includes kneeling hunched figures holding bound beings. In Yoruba culture, people with kyphosis (hunched back) are regarded as being touched by the god Ọ̀bàtálá who shapes the human form in the womb. The theme of ritual offerings is evoked by the disembodied heads within the interlocking circles of crocodiles biting the heads and tails of mudfish and by the tethered creatures. These creatures resemble Ofoe, the messenger of the god of death in the Benin kingdom, southeast of Owo, who has no body only a head, arms, and legs. 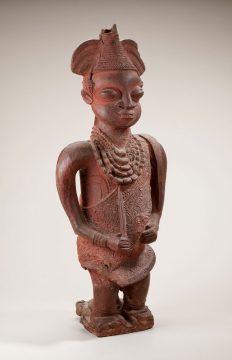 STUDYING YORUBA ART | Fired brilliance. This extraordinary ceramic figure, originally paired with a female counterpart (now in the collection of the Berg en Dal Museum, The Netherlands), was once the centerpiece in a meeting lodge of Òṣùgbó (or Ògbóni) society elders. The figure depicts a titled male elder adorned with a ritual sash over his left shoulder and beads of office around his neck. Its projecting conical headdress and bulging eyes and forehead evoke a head ritually prepared and filled with spiritual presence.
To have fired such a large and detailed figure required exceptional technical skill. Outside of the ceramic pair, there are no other known terracotta examples of Òṣùgbó society arts. The use of clay may allude to the power of the sacred earth in assisting Òṣùgbó society members as they make important judiciary decisions and balance the power of the king.