Revival, I don’t like the word revival. I don’t wake up a dead person and ask him to live. What one would like to see is an organic kind of transformation.

Where does style come from?

The art school at the University of Nigeria, Nsukka, has produced some of the leading figures in 20th- and 21st-century art. Uche Okeke (1933–2016), a formative modern artist in Nigeria, led the Nsukka school from December 1970. Keenly interested in his heritage, Okeke encouraged his colleagues and students to draw inspiration from Igbo arts and performances from the region surrounding the university. In the following decades, Nsukka has earned an international reputation for the quality of its faculty and students. Many—like Okeke—found inspiration in the fluid lines and symbols of uli, a mural and body painting art form practiced by Igbo women, and nsibidi, an ideographic writing system also found in southeastern Nigeria.

In 1997 the Smithsonian National Museum of African Art became the first international museum to mount a major exhibition, The Poetics of Line, and publication dedicated to Nsukka’s artists. The museum’s collection contains a number of important artworks by prominent teachers and alumni of Nsukka. 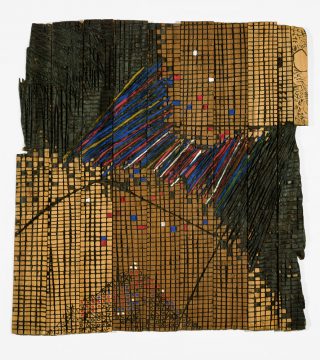 A man of many materials. Though born and educated in Ghana, internationally acclaimed artist El Anatsui taught for nearly four decades at the University of Nigeria, Nsukka, where he incorporated uli and various ideographic writing systems of southeastern Nigeria into his work. He also profoundly influenced future generations of artists.

The shimmering dots and lines of Earth-Moon Connexions reflect the influence of uli on his work and evoke astronomy’s gridlike plotting that fixes stars, moons, and planets within galaxies in deep space. Anatsui’s interest in repurposed materials and the tensions between solid form and the immaterial are evident in his earlier works in wood as well as the artist’s more recent works with bottle caps and found metals, such as the glittering Untitled on view in the exhibition African Mosaic (sublevel 1). 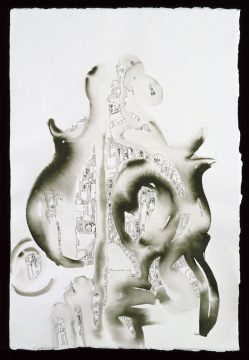 Artist, art historian, and teacher. As a member of the faculty at the University of Nigeria, Nsukka, Chike Aniakor was a founding proponent of an artistic movement known as either the Nsukka school or the Ulists. Aniakor incorporates into his work the Igbo graphic system known as uli, which was originally designed by women for body arts and murals. Aniakor’s mother was an uli artist, and her influence can be seen in the lyrical lines, streamlined forms, and sense of movement in Visual Incantations. This artwork also captures the artist’s interest in local heritage as subject matter—features that can also be found in the artwork of Nsukka students Tayo Adenaike and Ugochukwu-Smooth Nzewi.