Originating in regions from the Swahili Coast to Lake Tanganyika, Yemen, Oman, Somalia, and India, this exquisite assortment of jewelry and accessories reflect the many artistic strands that enliven Swahili aesthetics of adornment. Historically, Swahili city dwellers enjoyed dressing in material imported from overseas. They desired Indian silks, Arab jewelry, and platform sandals, for instance, which they combined in ways that were unique to the Swahili Coast. Earspools fabricated from a range of materials—such as those seen nearby in gold, colored paper and sequins, or horn—take their forms from the aesthetic traditions of inland Africa, while the array of sandals show local variations of a style originating in India.

Jewelry in Indian Ocean societies was considered a sound investment in one’s future and freedom and represented the financial security and autonomy of women. Individual pieces embodied memories and family histories and were treated as much-loved heirlooms. Women bequeathed their ornaments to female relatives or sold them in moments of hardship.

During the 19th and early 20th centuries, silversmiths in Swahili port towns enjoyed a swift business, with clients commissioning pieces that reflected international styles for occasions such as weddings, cultural events, and religious celebrations. Women of the Swahili Coast collected jewelry from afar, which intimately connected them to the seafaring cultures of the Indian Ocean world. Much of the jewelry on view can be seen in photographs of Swahili Coast women, whose sartorial flare brought Zanzibar fame, in European eyes, as the “Paris of East Africa.” 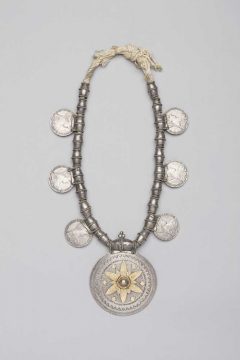 Attached on either side of the medallion are three Maria Theresa thalers. Originally minted in 1757 in Vienna, the Maria Theresa thaler was reminted on numerous occasions throughout the 19th and 20th centuries. The coin was popular in Indian Ocean trade for its silver content; it has been used as currency and as raw material to be melted down for jewelry and other luxury items. Similarly, jewelry was often melted and refashioned from one generation to the next to reflect the tastes of the current owners. 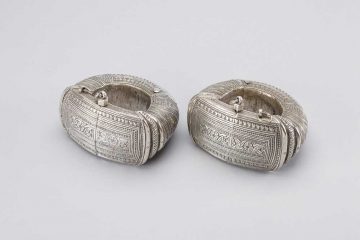 Swahili artist
Lamu, Lamu County, Kenya
Pair of wedding anklets
c. 19th to 20th century
Silver
Virginia Museum of Fine Arts, Robert and Nancy Nooter Collection, Adolph D. and Wilkins C. Williams Fund, 2003-19.1-2
Circuits of Silver
Before modern banking, a family’s wealth on the Swahili Coast was typically invested in silver and gold jewelry. Silver was often preferred to gold—it was more affordable and allowed for larger, more elaborate pieces. Silver was also associated with talismanic power, or the ability to protect the wearer from other people’s envy or negative intentions.
The techniques and styles displayed here attest to the incredible diversity of practices by silversmiths in Yemen, Oman, India, Somalia, and the Swahili Coast. The pair of wedding anklets from Lamu in Kenya displays engraving and filigree seen in delicate tracery with silver wire. In the 19th century, lavish jewelry like this was also given to female servants—called wapambe, the beautifully adorned—of powerful coastal patricians to wear as status symbols.
It is difficult to track styles to a single region or artist because items were traded across great lengths and frequently melted down and remade from one generation to the next to make new, more fashionable designs. Motifs, designs, and techniques traversed great distances, even if the artists themselves stayed in one place.