On the coastal headlands of eastern Africa, monumental stone marks the border zone between the African continent and the Indian Ocean. Since at least the 13th century, locals have built stately stone houses, tombs, and mosques, which have made Swahili towns and cities visible from great distances. The forms of this elite architecture changed over the centuries and varied from town to town, but they were always built of local coral limestone. This materiality—the weighty mass of coral stone—mediated human experience on the Swahili Coast in fundamental ways for centuries.

The decorative features of stone architecture are a complex fusion of cultural strands, including those from mainland Africa, the Arabian Peninsula, and South Asia. Overseas influences are evident in all the intricate woodwork and stone sculptures featured in this section. Carved doorways are an ancient Swahili form, but their surfaces, for example, have sculptural forms found in India. By the 19th century, wood-carvers fused Gujarati, neo-Gothic, and British Raj imagery and styles in a playful combination of many places and periods. The most wealthy patrons imported entire doors and windows from places like Mumbai, which signaled their ability to consume the artifacts of global modernity.

The Architecture of Elsewhere

The carved doorframes and windows found on the Swahili Coast represent a rich tradition stretching back to the late 17th century. The earliest extant dated example was made in 1694, but the practice of door carving grew dramatically during the 18th and 19th centuries in coastal cities such as Zanzibar Town, Lamu, and Siyu.

A great variety of decorative motifs, including rosettes, lotus leaves, and other floriated designs, animate the surfaces of these heavy wooden structures; rope, palm, and chain-link designs are common as border treatments. These, plus geometric and other abstract designs and flourishes of arabesque and calligraphic styles, constitute a veritable archive of aesthetic languages originating from places throughout the western Indian Ocean rim—all inventively combined by Swahili artists in the service of their patrons.

The styles are typically divided into two broad categories, identified as either Bajun or Zanzibar. The former, associated with northern Kenya, is distinguished by low-relief, geometric motifs. The latter, associated with the island of Zanzibar, is noted for higher relief and organic designs, possibly of Omani influence. Both types of design were used throughout the Swahili Coast. 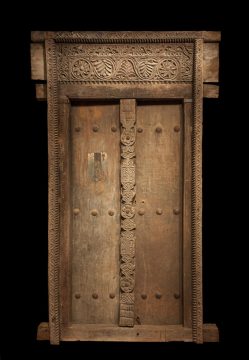 Architectural ornamentation on the Swahili Coast is typically focused on important features such as doorways or windows. These structures became increasingly elaborate during the 18th and 19th centuries.
Swahili-style doors usually consist of undecorated, inward-opening double panels that are framed by ornately carved lintels and jambs. This door has the rosette and lotus pattern derived from Indian carving. It was purchased by the donors in the coastal Tanzanian town of Bagomoyo from the owner of an old house that was being torn down. 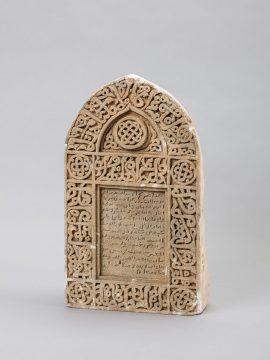 Swahili artist
Kilindini, Mombasa County, Kenya
Tombstone
1462
Coral rag (limestone)
Mombasa Fort Jesus Museum, National Museums of Kenya, 98.2.220
For inspiration architects and artisans on the Swahili Coast drew upon sources within Africa and across the Indian Ocean. This tombstone speaks to some of the locales with which inhabitants of East Africa sought to associate themselves. The coral stone from which it is carved was used by coastal artists as early as the ninth century.
The form—consisting of a simple arch, an outer band of calligraphy, and a central recessed panel—recalls those of contemporaneous tombstones in Egypt and Iran from the 12th to 15th centuries. The outer band is ornately carved with vegetal patterns and flowers integrated into the text. The simple inscription in the central recessed panel records the date of death of the deceased.