Objects in this section demonstrate the significance of language and writing—in roman and Arabic scripts—in Swahili aesthetic expression, especially in devotional contexts. Although diverse in doctrine and practice, most Swahili Coast residents are Muslims who approach the Qur’an and Arabic language with great reverence. Arabic is understood to be the language in which the Word of God was received, and the Qur’an is the materialization of God’s speech. Indeed, sacred words are considered to be endowed with divine attributes. Inscribing and reciting the Word are performative acts through which God intervenes in the world.

The creation of artworks and scholarship dedicated to exploring the sacred significance of writing has been key to Swahili artistry for centuries. The manuscripts on view include Qur’ans exquisitely illuminated in a classical Swahili style designed to intensify the visual presence of the written Word. An array of silver amulet cases and pendants containing specific passages from the Qur’an and esoteric inscriptions derived from its text safeguard their wearers from illness and misfortune.

While letter forms are beautifully ornamented in the art of Qur’anic illumination, words themselves are used to ornament the surfaces of a daunting range of everyday objects. Words on more mundane objects, like the wedding fans and bicycle mud flaps on view, convert them into carriers of the latest slang or timeless moral precepts. 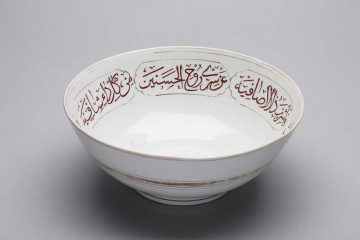 Monumental porcelain dishes with Arabic calligraphy—typically poetic lines with sacred or aphoristic meanings—are some of the most prized heirlooms in many Muslim societies in the coastal regions of the western Indian Ocean. While much porcelain was mass-produced and collected in great numbers, this piece is representative of individualized works, some of which were commissioned for specific occasions, such as a wedding. Dishes were also often given as wedding gifts, in which case the Arabic text, usually a Qur’anic quotation, was meant to bless the newlyweds. Here the artfully arranged letters of the Arabic words are meant not only to be read and contemplated but also to create strikingly abstract motifs and forms that display the graphic potential of calligraphy. 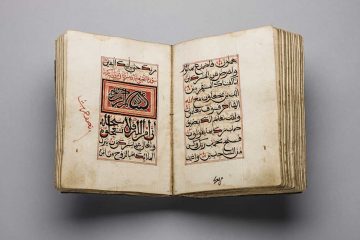 Qur’an Manuscripts from Siyu, in the Lamu Archipelago | This rare Qur’an manuscript is from the Swahili town of Siyu—a flourishing center of Islamic learning, bookmaking, and art production. Dating from the early 18th to early 19th century, hand-copied Qur’ans were beautifully ornamented by skilled calligrapher-scribes, many of whom were scholars in their own right—as evidenced by the annotations they delicately inscribed in the margins.
Siyu scribes developed a unique style of book illumination. They rendered the text and ornamentation in the classic triad of black, red, and yellow ink, but, strikingly, wrote the chapter headings in “reverse”: to form words, they outlined the blank page in black ink to create a dynamic play of positive and negative space. The lively asymmetry of the calligraphy in the margins—directions for when to prostrate in prayer and other commentaries for the reader—is a testament to the innovative creativity of the scribes. The inks and leather bindings of the manuscript produced in Siyu, while the paper used was imported from Italy.

Enclosed within ornate silver cases and worn close to the body, amulets are pious invocations and other mystically charged inscriptions derived from the Qur’an that are formulated to address a vast array of personal ailments, afflictions, and life challenges. Prepared by religious specialists with expertise in the curative properties of Qur’anic scripture, amulets vary widely and may include prayers, verses from the Qur’an, the names of God, the angels, and the prophets, or, a myriad of numerological and esoteric formulas.

Amulet cases are often made from silver, a metal thought to have protective properties. The exquisite ornamentation and significant size of several cases here speak to the elite status and wealth of the wearer. When in motion, the dangling clusters of bells extend the amulet’s presence into the realm of sound. The tubular canisters affixed to the Somali, Yemeni, and Kenyan examples enclose amulets made of paper that have been rolled into scrolls. At once intimate and portable, amulets allow devotees to keep the mystical potency of words close to them wherever they may go. 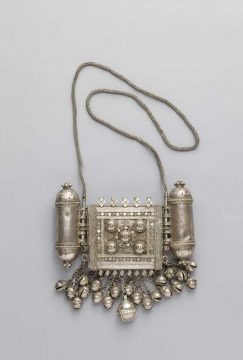 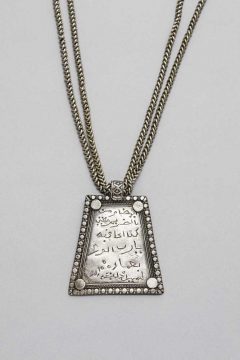 Swahili artist
Lamu Island
Lamu County, Kenya
Amulet
c. 19th century
Silver
Lamu Fort Museum, National Museums of Kenya
The surface of this pendant is inscribed with a combination of Arabic letters and cryptic phrases that can be deciphered only by its maker.