A rich confluence of cultures has long informed and animated Swahili arts. The objects in this section testify to the types of intercultural exchange, competition, and mobility that have shaped the history of the Swahili Coast.

Swahili networks of trade historically reached far into the African mainland. Terrestrial routes between the Swahili Coast and regions along the caravan paths to Lake Tanganyika were essential to the economies of eastern and central Africa starting in the 14th century. These channels also acted as conduits for the exchange of aesthetic sensibilities and artistic practices.

The global demand for Africa’s resources—ivory, timber, grain, and even people—had devastating and brutal consequences. By the mid-19th century, many Africans from other parts of central and eastern Africa were violently dislocated and taken to the East African coast as enslaved laborers to work on coastal and island plantations of the Indian Ocean. Societies such as the Manyema, Makonde, and Zaramo were deeply fractured, but they reconstituted; their resilience is amply evident in several artworks on view.

Seafaring arts point to the role of Swahili merchants and sailors in shaping the navigational histories of the Indian Ocean. Lavish gifts of gold and silk bestowed upon American merchant-consuls by the sultans of Zanzibar in the 19th century demonstrate the growth of Africa’s political and commercial ties across the Indian and Atlantic Oceans.

The objects in this introductory section share a multistranded history that links many actors—African, Arab, European, and South Asian—across time, land, and sea. Together they shed light on the diverse facets of the arts of the Swahili Coast.

Slavery on the Swahili Coast

The enslavement of African peoples and their incorporation into economies of production and exchange throughout the Indian Ocean region have an even longer history than that of the transatlantic trade. Atlantic trafficking began in the 15th century when captive peoples from western and central Africa fed Europe’s need for mine and agricultural workers for plantations in the Americas.

The East African trade in captive humans, on the other hand, was connected to demand from the Arabian Peninsula and India from as early as the seventh century. Captives were taken from eastern and central Africa to Yemen, the Persian Gulf, India, and the Swahili Coast to work as domestic servants, sailors, divers, and mine workers.

Portuguese colonization in the 16th century, and subsequent alliances with the merchant princes and ruling dynasties of Oman, increasingly connected the aristocratic families of Swahili cities to wider capital markets, but also exposed them to greater imperial pressures. Meanwhile, the outlawing of the Atlantic trade in the 19th century led traders to look elsewhere for enslaved Africans who could work on plantations in the Americas and on Indian Ocean islands.

Driven by increasing global demands for East African commodities, Sultan Seyyid Said bin Sultan of Oman moved the capital of his commercial empire from Muscat, in the Arabian Peninsula, to Zanzibar in the mid-1830s. By 1837 Zanzibar had become the seat of the British-backed Omani Sultanate and soon thereafter a British protectorate. Clove plantations using forced labor were established in Omani-held regions of the Swahili Coast, such as Zanzibar and Pemba.

While institutions of bondage and slavery had existed in the past, the dehumanizing cruelty and scale of 19th-century plantation slavery forever changed the region. Slavery was finally abolished in Zanzibar in 1897 and in Kenya in 1907. The expansion of commodity markets during this period was built in part on terror and disruption. The violent separation of families and refugee migrations led to the creation of new identities in communities stretching from the coast deep into regions of the eastern Congo basin. 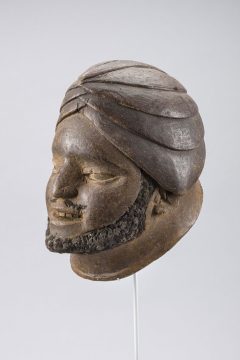 Performed originally in masquerades associated with initiation or for entertainment generally, mapiko (sing. lipiko) reflect the Makonde experience of living in a fluid, cross-cultural border region. Especially during the colonial period, laborers migrated regularly between Portuguese and British territories. This, plus the commercial production of masks to sell to colonial officials, contributed to shifts in aesthetic choices and the characters the masks portrayed. Caricatures that were naturalistic in style of women and men from “exotic” cultural groups became popular among Makonde sculptors. 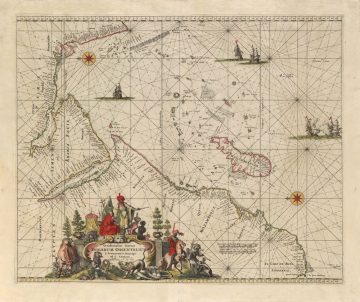 Frederick de Wit
1629–1706, b. Gouda, The Netherlands
Worked in Amsterdam
Portolan chart Indiarum Orientalum (source: Harmonia macrocosmica, pl. 56)
Map, published in The Netherlands
1708
The Board of Trustees for the University of Illinois at Urbana-Champaign on behalf of its Rare Book & Manuscript Library 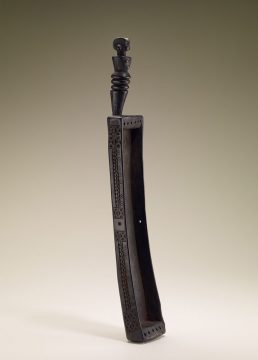 An orientation toward the Indian Ocean world is only one dimension of Swahili culture. The decorative language of inland Africa, with its emphasis on dense geometric patterning, also deeply informed ornamental styles of the Swahili Coast. From the 14th century, caravan routes between the coast and the interior of eastern and central Africa conveyed not only people, raw materials, and manufactured goods but also artistic practices and preferences. The violent capture and enslavement of children, women, and men—and their enforced “mobility” across great distances—also played a key role in the making of the Swahili Coast as a connected space. Indeed, some Swahili artists originally came to the coast as enslaved laborers.
This box zither from coastal Tanzania speaks to these histories of movement and connectivity. The geometric carving along its sides echoes the intricate patterning seen on objects of regalia from the historic Nyamwezi, Tabwa, and Manyema kingdoms of Central Africa. This style of carving also embellishes doors, containers, cooking implements, and plasterwork throughout the coast. The figure that surmounts the zither departs from Swahili aesthetics and relates instead to figural works by Zaramo artists associated with girls’ initiation ceremonies. 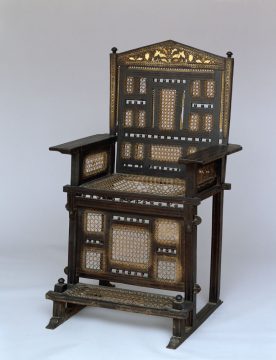 Swahili artist
Zanzibar, Tanzania
Chair (kiti cha enzi)
19th century
Wood, plant, fiber, ivory
Peabody Essex Museum, Salem, Massachusetts, gift of Miss Ruth R. Ropes, Mrs. Mary R. Trumbull, and Mrs. Elizabeth Williams, 1940, E33723
A kiti cha enzi in the Swahili language can be translated as “throne of power” or “chair of ability.” Such chairs represented the history and laws of indigenous states and dynasties. Powerful families used them during kingship ceremonies, weddings, and other public festivals. To sit in state on a kita cha enzi was a complex performative act; it meant the sitter was projecting their ability to rule and shape the future. A U.S. diplomat living in Zanzibar acquired this example around the 1860s and displayed it in his home as an artifact of Swahili culture.
High-backed chairs are a classic form of royal insignia in many central and eastern African societies; in them, artists of the Swahili Coast visualized local connections to overseas empires. Their overall forms are similar to those of Portuguese and Indian chairs and thrones. The ivory and mother-of-pearl inlay intentionally resembles the woodworking arts of the Middle East, especially of major centers such as Cairo, Damascus, and Istanbul.