Market Symphony is an original work of sound art the Smithsonian National Museum of African Art commissioned artist Emeka Ogboh to create specifically for a gallery in the museum. Drawing on the commercial cries and urban ambiance of Balogun—a sprawling open-air market in Lagos, Africa’s largest and most populated city—the artist invites us to experience the distinctive sounds of this vibrant Nigerian metropolis and the traders who drive its daily economy.

Ogboh considers sound art akin to sculpture: it shapes our experience of a space, even with our eyes closed. Women and hawkers call from all sides against the backdrop of horns, footsteps, and city living to transport us from the hush of a gallery to a commercial hive approximately 5,407 miles away.

In Market Symphony, Ogboh has combined the ambient sounds of his hometown with electronic compositions to create an immersive experience. Visitors hear the voices of traders advertising their goods and calling out for potential customers, the sounds of bantering between buyers and sellers, and the overall bustle of Lagos’s major markets. Speakers are mounted on colorful enamelware trays commonly used for displaying goods at stalls in Nigerian markets like Balogun. Laden with food and other goods, such trays are also popular with itinerant hawkers who weave through Lagos’s busy streets while balancing their wares upon their heads. Whether concealed beneath merchandise or navigating crowded streets, these trays lend to the color, chaos, and creativity characteristic of the symphony of rhythms at Balogun and other markets.

Though sound art began to transform New York’s experimental art world in the 1980s, it has only gained traction among Africa’s talented artists in the past decade. Like South Africa’s James Webb and Egypt’s Magdi Mostafa, Nigerian Emeka Ogboh is a pioneer of sound art on the African continent. His “soundscapes” have transposed the aural experience of Lagos to Addis Ababa, Berlin, Dakar, Helsinki, Houston, Seattle, Venice, and Washington, D.C.

Born in 1977, Ogboh studied graphic design at the prestigious University of Nigeria, Nsukka, receiving his B.A. in fine arts in 2001. His 2008 participation in a class on the audible spectrum taught by the Austrian artist Harold Scherz at the Winter Academy in Fayoum, Egypt, launched his experiments with sound art. Internationally acclaimed for his work in sound and video, Emeka Ogboh’s artworks have appeared in major international venues, including the Dak’Art Biennale and Mikromusik Festival in 2014, and the 56th Venice Biennale in 2015. His works can be found in private collections and exhibitions in Colombia, Croatia, Denmark, England, Finland, France, Germany, Greece, Italy, Luxembourg, Morocco, Nigeria, Pakistan, South Africa, Spain, Switzerland, Turkey, and the United States. He has been selected from an internationally competitive pool to create a work of art for the Peace and Security Building of the African Union in Addis Ababa. Currently, he is an artist in residence at the DAAD (Deutscher Akademischer Austauschdienst) in Berlin, Germany.

The artist lists among his influences the Igbo minstrels of southeastern Nigeria; sound legends like Janet Cardiff, Bill Fontana, and R. Murray Schafer; and the city of Lagos itself. Emeka Ogboh’s sound recordings investigate the history and aural infrastructure of cities in general and Lagos in particular, while also promoting a focus on listening and hearing. To learn more about Emeka Ogboh, visit his website at 14thmay.com. Close your eyes and imagine yourself shopping. Do you hear the metallic scraping of hangers on rods, the muting of footsteps on carpet, and the whir of an escalator? Or do you hear the laughter, jeers, calls, and clatter of an open-air market? What space do your ears shape for you?

Emeka Ogboh records the distinctive sounds of Nigeria’s sprawling, thriving metropolis Lagos in order to reconstruct the experience of its dynamic spaces and urban ambiance. The Smithsonian National Museum of African Art commissioned Ogboh to create Market Symphony, a site-specific installation in which the artist has combined the layered sounds of his hometown with electronic compositions to create an immersive experience. The voices of traders advertising their goods and calling out for potential customers join the sounds of bartering between buyers and sellers and the general hubbub of a bustling Lagos market—in particular, Balogun Market, the inspiration for this artwork. Ogboh chose to install his speakers on the enamelware trays commonly used by stall owners to display their goods in markets like Lagos’s Balogun and by itinerant hawkers who skillfully weave through crowded streets balancing food and other wares on their heads.

The New York Times estimates that the population of Nigeria’s economic hub, Lagos (its political capital is Abuja), is now at least twenty-one million, surpassing Cairo as Africa’s largest city.1 And within this teeming city of islands and industries lies Balogun, arguably the largest market in western Africa. Located across from the Lagos Marina, Balogun is known for selling provisions like food, shoes, clothes, and textiles. Indeed, travel magazine like Delta Airline’s Sky have described Balogun as a must-see destination, writing “earn major bragging rights by navigating this see-it-to-believe-it open-market maze.”2

For Emeka Ogboh, the intense colors and cadences of Balogun are emblematic of both his home and the vibrancy of urban spaces. His work focuses on the history and aural infrastructures of cities—Lagos, in particular—and directs attention to the power of hearing and listening. As he has said,3

“If you have ever been to Lagos you will understand why sound is my preferred medium. One of the first impressions of the city is the intensity of its soundscapes. For a first-timer in Lagos, especially from the Global North, it can be a shocking experience to have the city’s soundscapes invading your eardrums. . . . [I] opened my ears to the uniqueness of the sounds of my city. So I started to listen, record, and experiment with these sounds. The more I recorded and listened, the more I appreciated their power to immerse and transport the listener. I find sound more engaging than any other medium.”

In her book The Soundscapes of Modernity: Architectural Acoustics and the Culture of Listening in America, Emily Ann Thompson writes that a “soundscape” is “an auditory aural landscape . . . which is simultaneously a physical environment and a way of perceiving that environment; it is both a world and a culture constructed to make sense of that world.”1 Emeka Ogboh creates such aural landscapes that can at once create a culturally specific site, evoke a concrete experience for multiple senses, and capture the abstract essence of an idea and its location. He is among a select number of African artists to join an international cadre of sound specialists whose work has redefined contemporary art and new media expression over the past three decades.

Ogboh’s sound installations range from deeply personal explorations of place and memory to investigations of crowded public urban spaces. The intimate C2073 (2013) was named for the code to unlock his room when Ogboh was on a residency in Yokohama, Japan. The artist recreated this room, complete with furnishings, but covered it in newspapers from the dates of his residency. Headphones rested on the table and offered listeners a glimpse into conversations recorded during his stay. Other works, like Lagos State of Mind (2012)—the artist’s first work to be exhibited in the United States—recall such iconic sights and sounds of Lagos as a black-striped canary yellow Danfo commuter bus and the verbal mapping called out by its conductor. The power of such works to evoke Lagos is so real that when a related work, Lagos-Oshodi (2011), was on view in Helsinki, Finland, a Nigerian man passing by thought he was having an out-of-body experience. The sounds emanating from Ogboh’s artwork prompted the man to make his first trip home in years.

Emeka Ogboh’s work can be haunting, its impact visceral. In The Song of the Germans (2015), his recent installation for the 56th Venice Biennale, the artist tackled xenophobia and the rise of anti-immigrant sentiments in Europe. Working with the Berlin-based Afro-Gospel choir, he had the German national anthem translated into ten different African languages and then recorded individual members singing the anthem in their native tongue. Visitors stood in the middle of the vaulted room, surrounded by speakers set at the height of each performer who begin to sing from behind, to the side, and all around until one is immersed in the union of voices.
—Karen E. Milbourne, curator
1 Emily Ann Thompson, The Soundscapes of Modernity: Architectural Acoustics and the Culture of Listening in America, 1900–1993 (Cambridge, MA: The MIT Press, 2002): 1.

Symphony Of The City: Nigerian Artist Draws Songs From The Bustling Market

To people who live in big cities, the sound of honking, the whir of traffic, the howl of street vendors, and the clang of construction can just be background noise.

But for Nigerian sound and video artist Emeka Ogboh, the city is his palette—his symphony of sound. And his compositions can whisk the listener to another time and place.

Sounds of the City 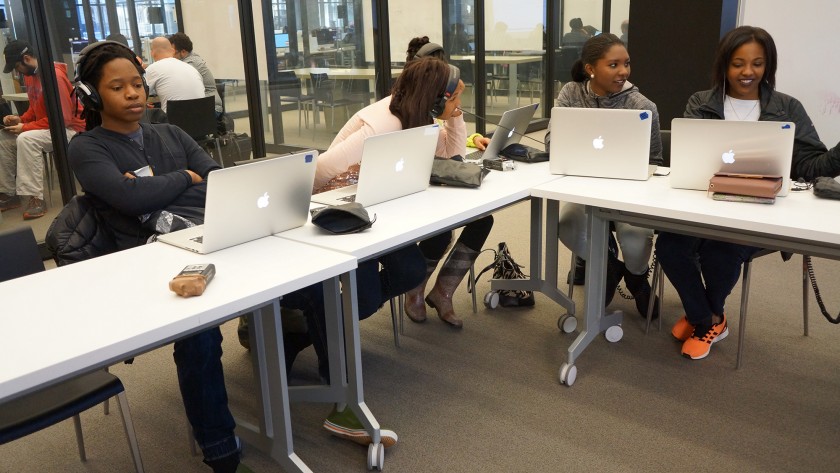 During the first week of February 2016, Emeka Ogboh participated in workshops at three local high schools and at the museum. Inspired by his soundscapes of Lagos, the Nigerian sound artist worked with 100 local teens to create a collaborative soundscape of D.C. Ogboh introduced teens to the idea of “soundwalks”—journeys through their own neighborhoods to capture ambient sounds of the environment.

Listen below to some of the students’ recordings. We were only able to record at a few locations during Ogboh’s visit.

To listen to the sounds just click on “LISTEN HERE” in the maps information box.