Connections between African and Asian spaces have defined cultural identities and expressions across centuries. This symposium considered the dynamic locations, unique objects, and remarkable individuals whose stories evidence a radical realignment of historic power structures and axes of travel, growth, and exchange. Papers ranged from antiquity to the present with an emphasis on art and material culture. 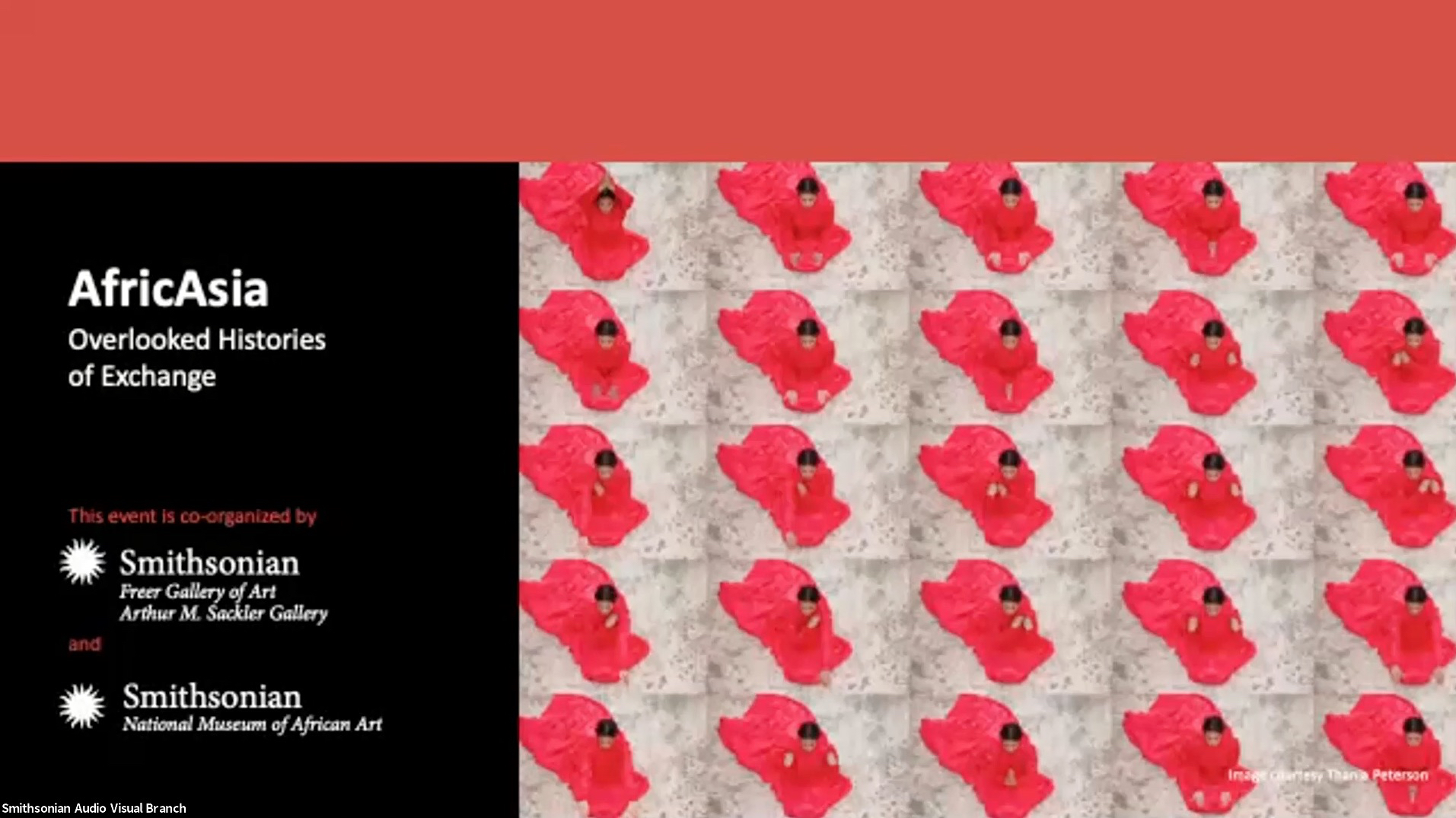 Africa and Asia are often presented as monolithic and distinct entities, though they have been intertwined since antiquity. Professor Elizabeth Lambourn will offer an introductory overview of “AfricAsia” and the historic connections between these regions. Professor Pedro Pombo, artist Shiraz Bayjoo, and curator Zoe Butt will then consider key sites of exchange and their cosmopolitan milieus. Kathleen Bickford Berzock will serve as a respondent.

Shame and Resistance in the Post-colony: Plantation Legacies and Racial Hierarchies in the Mascarene Islands
Shiraz Bayjoo, Artist

Bios Day 1
Dr. Elizabeth A. Lambourn is a Reader (Associate Professor) in South Asian and Indian Ocean Studies at De Montfort University in the UK. A historian of South Asia and the Indian Ocean world before 1500 CE, she is committed to the interdisciplinary and cross-cultural study of medieval history, and her work engages equally with texts and ‘things,’ and with texts as material ‘things.’

Dr. Pedro Pombo is Assistant Professor at Goa University, India. He received his PhD in Anthropology in 2015 from ISCTE- IUL, Portugal, with an ethnography on spatial belonging, local history and personal narratives in Southern Mozambique. Pedro investigates traces of maritime circulations in the Indian Ocean though dialogues between cartography and archives, art, heritage, and material culture.

Shiraz Bayjoo is a Mauritian artist based between London and Mauritius. Bayjoo studied painting at the University of Wales, Institute Cardiff, and was artist-in-residence at Whitechapel Gallery in 2011. Born in Mauritius, Bayjoo’s work focuses on the Indian Ocean and the European historical legacies that have shaped the region. Bayjoo’s practice explores the social, political, and historical conditions integral to Mauritian cultural identity and the wider Indian Ocean region.

Zoe Butt is a curator and writer who lives in Vietnam. Her practice centers on building critically thinking and historically conscious artistic communities, fostering dialogue among cultures of the globalizing souths. Currently Artistic Director of the Factory Contemporary Arts Centre, Ho Chi Minh City, Zoe is a member of the Asian Art Council for the Solomon R. Guggenheim Museum in New York and in 2015 was named a Young Global Leader of the World Economic Forum.

Kathleen Bickford Berzock is associate director of curatorial affairs at the Block Museum, where she provides artistic leadership of the exhibition, publication, and collection programs in support of the museum’s cross-cultural and interdisciplinary mission. She is curator of Caravans of Gold, Fragments in Time: Art, Culture, and Exchange across Medieval Saharan Africa, which opens at the National Museum of African Art in October 2020. From 1995 to 2013, Berzock served as curator of African art at the Art Institute of Chicago.

This session explored the lives of individuals whose travels between Africa and Asia—by choice or by force—reveal complex networks of contact and entanglement across time. These personal trajectories mirror larger political and economic realities with resonances that continue today. Scholars Michael Laffan and Thomas Lockley were joined by artist Thania Peterson for robust conversation with discussant Yoon Park.

Bios Day 2
Michael Laffan is professor of history at Princeton. He is a student of Indian Ocean connections between Indonesia, South Africa, and Egypt. Having published on Islamic nationalism (Islamic Nationhood and Colonial Indonesia, Routledge 2003), orientalism (The Makings of Indonesian Islam, Princeton, 2011), and ideas of diasporic connection (Belonging across the Bay of Bengal, Bloomsbury, 2017), his latest manuscript interrogates the multiple claims of empire—Dutch, British, and Ottoman—on Malay and Arab subjects from the 1770s to the end of the Japanese occupation of Java.

Thomas Lockley is an associate professor at Nihon University College of Law in Tokyo. He has researched and published on a number of historical figures, but is primarily known for his work on Yasuke, the African warrior who fought beside the Japanese warlord Oda Nobunaga in the 1580s. He has written books about Yasuke both in Japanese translation and in English. The latter, entitled African Samurai, was published in the US in 2019.

Thania Petersen is a multi-disciplinary artist who uses photography, performance, and installation to address the intricacies and complexities of her identity in contemporary South Africa. Petersen’s reference points sit largely in Islam and in creating awareness about its religious, cultural, and traditional practices. She attempts to unpack contemporary trends of Islamophobia through her analysis of the continuing impact of colonialism, European and American imperialism, and the increasing influence of right-wing ideologies. Threads in her work include the history of colonialist imperialism in Africa, Asia, and the Middle East, as well as the social and cultural impact of westernized consumer culture.

Yoon Jung Park is a leader in growing field of China/Africa studies. She is the author of A Matter of Honour: Being Chinese in South Africa (Jacana/Lexington Books) and is currently completing a book on Chinese migrants in Africa. Her research focuses on ethnic Chinese in southern Africa and perceptions of Chinese people by local communities, centering on migration, racial and ethnic identity, race/class/power, gender, affirmative action, and xenophobia. She is currently the Associate Director of the China-Africa Research Initiative at the Johns Hopkins School of Advanced International Studies.

History leaves its traces. Art historians Iftikhar Dadi, Ruth Simbao, and Ruth Barnes will look to the works of art and material culture shaped by AfricAsian exchanges. Drawing attention to both the overlooked treasures of history and the insightful works being created by artists today, this enriching session will also feature professor Finbarr Barry Flood as a discussant.

Bios Day 3
Ruth Barnes is the Thomas Jaffe Curator of Indo-Pacific Art at the Yale University Art Gallery. She received her doctorate from Oxford University and was previously textile curator at the Ashmolean Museum, Oxford. Her publications include The Ikat Textiles of Lamaleraand Indian Block-Printed Textiles in Egypt: The Newberry Collection in the Ashmolean Museum, Oxford. One of her most recent books, Five Centuries of Indonesian Textiles, co-edited with Mary Kahlenberg, received the Textile Society of America’s R. L. Shep Award in 2010.

Iftikhar Dadi is associate professor and chair of the Department of History of Art and director of the South Asia Program at Cornell University. He researches modern and contemporary art from a global and transnational perspective, with emphasis on questions of methodology and intellectual history. Publications include Modernism and the Art of Muslim South Asia (2010), the edited monograph Anwar Jalal Shemza (2015), the co-edited catalog Lines of Control (2012), and the co-edited reader Unpacking Europe (2001).

Ruth Simbao is the NRF/DSI Research Chair in Geopolitics and the Arts of Africa at Rhodes University in Makhanda, South Africa. She received her PhD from Harvard University, and is currently an editor of African Arts. She is a core researcher in the Africa Multiple Cluster of Excellence (Rhodes, University, the University of Lagos, Moi University, Joseph Ki-Zerbo University, and Bayreuth University), and the PI of Artivism, Social Justice and Epistemic Revolution.

Finbarr Barry Flood is founder-director of Silsila: Center for Material Histories and William R. Kenan, Jr., Professor of the Humanities at the Institute of Fine Arts and Department of Art History, New York University. His publications include The Great Mosque of Damascus: Studies on the Makings of an Umayyad Visual Culture (2000) and Objects of Translation: Material Culture and Medieval “Hindu-Muslim” Encounter (2009). In autumn 2019 he delivered the Chaire du Louvre lectures at the Musée du Louvre on the theme Technologies de dévotion dans les arts de l’islam: pèlerins, reliques, et copies, accompanied by a book of the same title published by Hazan/musée du Louvre.