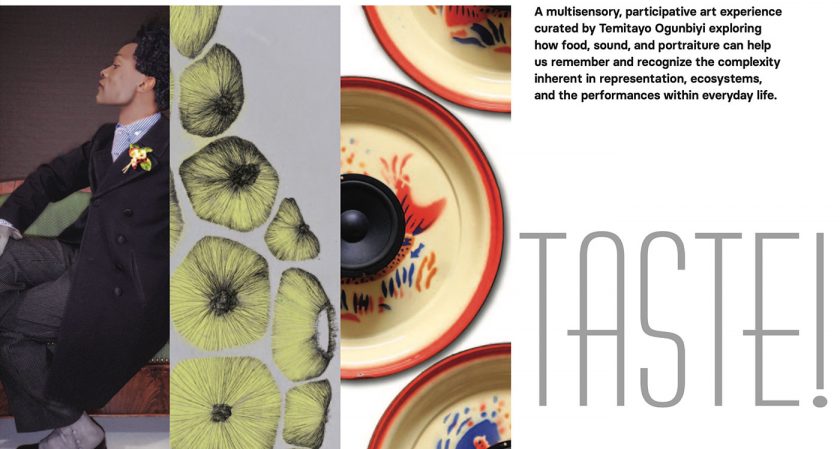 Taste! is a platform for creative encounters centering on a multifaceted, far-reaching Lagos. Realized in collaboration with the Africa International Film Festival (AFRIFF), ART X Lagos, and the African Artists’ Foundation. Taste! is the foundation experience of 24 Hours of the Smithsonian in Lagos, the inaugural event that launches the National Museum of African Art’s new international presence.

Join and watch as visionary leaders transforming the institutions and structures that present African talent locally and worldwide.

About this event
From film to visual arts, these leaders are offering compelling new models of who gets presented—and by whom. This robust conversation considers how to overcome media divides, build partnerships, and strategize for the future.

This project draws on Nigerian-Jamaican-American Ogunbiyi’s practice that seeks to position plant knowledge she has learned in Lagos in dialogue with Western study of plants. Her strategies document the transformations of botanicals as they are prepared for eating. Her works fuse botanical forms with the shapes of hairstyles she has observed in the Caribbean, West Africa, and elsewhere. Selections from Ogunbiyi’s forms are printed on the servers’ and ushers’ custom aprons, as well as on take-home gift items.

Chef Renèe Chuks
Chef Renèe Chuks is a culinary innovator and entrepreneur specializing in combining local and diasporic ingredients to support more sustainable and empowering food chains. She is the cofounder and CEO of Aldente Africa, an artisanal food and beverage company, and executive academic director and lead chef instructor at the Umami Center for Culinary Arts. Chuks is a classically trained French chef, graduating from Le Cordon Bleu College of Culinary Arts, Austin, Texas.
Temitayo Ogunbiyi
Temitayo Ogunbiyi creates works on paper, paintings, sculptures, and ambitious installations. In addition to exploring plants as they live around her, she also aims to record the socio-economic conditions they exist within and how they are transformed in a wide range of culinary traditions. Ogunbiyi received a 2020–2021 Digital Earth Fellowship, a 2018 Smithsonian Artist in Research Fellowship, and a 2014 Ford Foundation Fellowship. Her artwork has been exhibited at the Madre Museum (Naples, Italy), the 2019 Lagos Biennial, the Pulitzer Foundation for the Arts, and the Centre for Contemporary Art Lagos, among other venues. She is also a director of Yinka Shonibare CBE’s Guest Artist Space Foundation.

Taste! Mystique by Iké Udé is a three-part art experience that includes a master class, an exhibition with interactive studio sets, and a tableau vivant living installation.

Taste! Mystique 1
On November 5, Iké Udé partnered with the African Artists’ Foundation to lead a master class for a group of emerging Lagos-based photographers. The young artists were tutored by Udé in his signature style—creating mystique at the intersection of harmony and the unexpected. Participants took portraits of Lagosian Nollywood Star, Enyinna Nwigwe, positioned with evocative props.
Taste! Mystique 2
Alongside photographs from the master class, Udé presents two bespoke studio sets that reflect and disrupt distinct, cultural references from Lagos and beyond. The opulent sets offer visitors an opportunity to perform, take photographs, and commune. Within Udé’s compositions, participants can choose how to participate in personal negotiations of space and proximity.
Master Class Participants. Toyin Adedokun, Neec Nonso, Ismail Odetola, Temitope Ogungbamila, and David Shonowo
Taste! Mystique 3
The Taste! Mystique experience culminates in a living installation at the opening night party of the Africa International Film Festival. Guests of the festival’s opening celebration can become works of art by posing for photographs against another of Udé’s exuberant sets.

Iké Udé
Iké Udé is a Nigerian-American conceptual artist who has been creating work that complicates notions of identity and perception since the 1990s. He uses photography to draw attention to how individuals portrayed in highly posed “performances” can reveal more truth than contrived poses that aim to be natural. Udé’s work is in the permanent collections of the Solomon R. Guggenheim Museum, the Smithsonian National Museum of African Art, Sheldon Museum, RISD Museum, New Britain Museum of American Art, Minneapolis Institute of Arts, and many private collections. His forthcoming solo exhibition Iké Udé: Nollywood Portraits opens at the Smithsonian National Museum of African Art in Washington, D.C., in February 2022.

Emeka Ogboh
Emeka Ogboh uses sound and gastronomy to create installations that have included music, soundscapes, limited editions of artisanal beer, sculpture, and collaborations with chefs. He increasingly uses these works to examine how visual art can catalyze conversations about the environment. Having exhibited at documenta 14 (2017), the Venice Biennale (2015), and the Dakar Biennale (2014), he is an internationally acclaimed artist with works in major collections worldwide, including the Smithsonian National Museum of African Art. This past September, to mark the close of Afrique 2020, Ogboh presented a medley of his installations capturing Lagos at the Élysée Palace in Paris.