The Indian Ocean is known as Ratnakara in the ancient Sanskrit literature. Ratnakara means “the maker (creator) of gems”

We at the National Museum of African Art wish to tell an exceptional story. It is a story that begins when trade flourished in and around the Indian Ocean, sweeping up the East African coast and across the Arabian Peninsula. It is a story of diasporic influence and connecting cultures. It is a story that culminates in the extraordinary beauty found today in the arts of Oman and its influence on the peoples and cultures of eastern Africa.

With the generous and historic gift of $1.8M from the Sultan Qaboos Cultural Center in Washington, DC, the National Museum of African Art was able to bring this wonderful story to its many visitors through various programming and exhibit related projects. 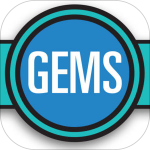 The Connecting the Gems of the Indian Ocean Project is proud to announce the release of its own mobile app. The app will feature information found in the Gems programmatic activities as well as additional resources that will provide better context to the rich history of the communities surrounding the Indian Ocean.

Highlights of the app include language components in Swahili, Arabic, and English as well as interactive maps, 3D model viewers, and video content.

The app is free and can be downloaded for iOS or Android below.

The 30 minute documentary gives viewers an opportunity to hear interviews from choreographer Ray Mercer, theater manager Denise Saunders Thompson, set designer Paul Falcone and costume design staff about the making of the production. Filmmaker Dodge Billingsley and museum education specialist Nicole Shivers will discuss the film with the audience after the screening.

Hamdan, Through the Gate of Tears: Backstage is a modern ballet that celebrates one man’s journey from his homeland of Oman to East Africa. Oman, which lies on the southeast coastline of the Arabian Peninsula, is a land filled with Wadis deserts, beaches and mountains. Using modern dance and contemporary Afro-Arabian music, Hamdan tells the story of his momentous decision to leave his country for a better life and set sail aboard a dhow headed to Zanzibar. This ballet presents modern dance styles as it explores the folktale of Hamdans journey, steeped in the cultural traditions of Oman and East Africa. Mercer’s choreography brings this impassioned tale to life.

“We are delighted at the National Museum of African Art to show this unique documentary at this year’s San Diego Film Festival”, Shivers said. This is a first for the museum and an opportunity to bring this exceptional story about the beauty of Oman and the Swahili coast to a new audience. Later that weekend, actress Robin Givens presented the filmmakers, Dodge Billingsley and Nicole Shivers with the Award for Best Documentary.

Sailors and Daughters: Early Photography and the Indian Ocean

The Connecting the Gems of the Indian Ocean: From Oman to East Africa project is proud to present Sailors and Daughters: Early Photography and the Indian Ocean World, the Museum’s first-ever online exhibit made possible by a gift from the Sultan Qaboos Cultural Center. Sailors and Daughters reveals the expansive maritime societies of Zanzibar, the east African coast, and Persian Gulf. From the 1840’s, cameras traced the international migrations of traders, sailors, sons, and daughters through Indian Ocean ports, continuing trade that dates back over five millennia. For instance, a highlight of the exhibition brings together early images by German photographer Hermann Burkhardt of Oman in 1904, which resemble photographs captured in Stone Town. East African cities flourished as hubs of both land and sea trade routes, which extended to the central African interior, the Middle East, Indian Ocean islands, western India and the Far East.

The Song of Lionogo – A Graphic novel

The Song of Lionogo: An Indian Ocean Mythological Remix

“The Smithsonian’s National Museum of African Art launched its first graphic novel Monday, May 11. The Song of Lionogo is based on a Swahili mythological figure from East Africa and was inspired by the cultural connections between the Arab peninsula and the Indian Ocean. It offers an interactive and educational experience to teens and youths: it incorporates a map of specific locations in the novel, a glossary to introduce readers to a new vocabulary and enables readers to include their own story plots.” The National Museum of African Art hosted a special selection of readings accompanied by a discussion with renowned authors Ngugi wa Thiong’o, MG Vassanji and Abdulrazak Gurnah on Wednesday, March 4th, 6:30 – 9:00pm. The program brought together for the first time three prolific East African authors/scholars to discuss representations of Indian Ocean cosmopolitanisms, both as idyllic spaces as well as their breakdowns in times of crises; the development of the Indian Ocean world as a trans-regional economic cultural space; hybridity and also the vexed issues of endogamy and exogamy; the ideas of “Africa” and “African,” and the competing claims of indigeneity and diaspora.

The Clarice Smith Performing Arts Center at the University of Maryland hosted the Opera QADAR in December 2014. Composed by award-winning composer, playwright, and pianist Tony Small and commissioned by the National Museum of African Art, QADAR introduces western audiences to the music and culture of Oman through a seamless exchange of African and Arabic music genres. With Denyce Graves serving as Artist Consultant, Qadar: An Operetta for Children uses the vernacular of opera for a cultural exchange between Oman and Zanzibar.

This VIP dinner of over 150 guests, on April 2014, celebrated the opening of “Connecting the Gems of the Indian Ocean” and the sponsorship of the project by the Sultan Qaboos Cultural Center.

As part of the Connecting the Gems of the Indian Ocean project, the National Museum of African Art hosted an Arabic summer language and culture workshop as well as Swahili Music concerts. During the months of June and July 2014, Anna Mwalagho and the Afrofloetry band performed traditional Taarab music and over twenty-five students learned Arabic and Swahili as part of free cultural workshops.