The National Museum of African Art remains temporarily closed. To view the status of the Smithsonian’s other museums and Zoo, visit si.edu/museums.

How does one fall in love?

What makes a collection great? 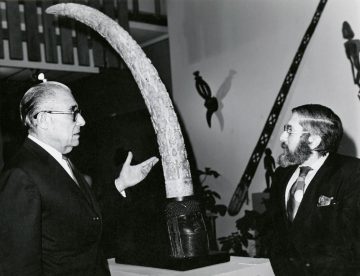 Paul Tishman was often asked why he and his wife Ruth decided to collect African art. His simple reply below is a testimony to their lifelong love affair with the diverse arts of the African continent.

In 1959 collectors Paul and Ruth Tishman bought their first two artworks, from the Benin kingdom of Nigeria, including an exquisite ivory female figure. Over the next 20 plus years they built one of the great private collections of African art. While unacquainted with Africa’s modern and contemporary works, the Tishmans nevertheless assembled a collection of classical African art unparalleled in its depth and breadth of materials, time periods, and geographic regions. 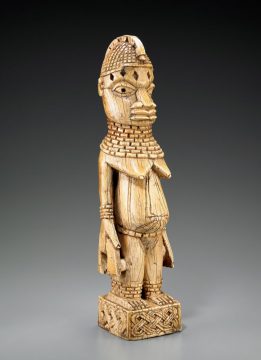 Royal attendant. This ivory figure is one of the first two African artworks acquired by the Tishmans. A court artist carved this young woman with the distinctive coral bead jewelry and crest hairstyle of an attendant to the queen mother. A queen mother would have had her own palace with a separate court and attendants. Upon her death, the king would commission an altar in her memory. This figure was probably intended for such an altar. 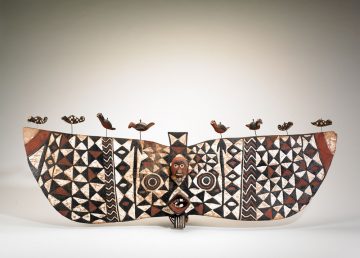 Winged wonders. This mask is a vision of new beginnings. A master Nuna sculptor captured the patterned brilliance of the butterfly in the broad, richly decorated wings of this mask. The mask represents a nature spirit that combines human and animal forms, including birds and chameleons, to suggest knowledge and powers bridging earth and sky. Because butterflies signal the coming of rain in Nuna communities, they are connected with the start of the farming season. 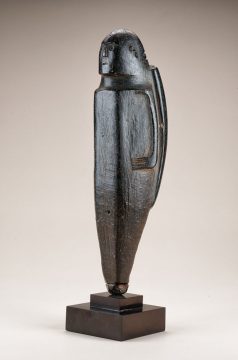 Speculations in stone. Stone sculptures from different regions of Africa attest to the historic diversity of styles and artistic creativity across the continent. The origins and contexts of such figures, however, may be only partially understood today.

Despite a lack of archaeological data, the standing male figure and a related female figure in the British Museum have, since the 1950s, been linked to Great Zimbabwe, a 13th- to 15th-century religious center built by a powerful Shona kingdom. The use of stone and the suggestion of wings on this figure have led to unconvincing comparisons with the soapstone birds found at the site. Research to uncover the history of this intriguing sculpture is ongoing. 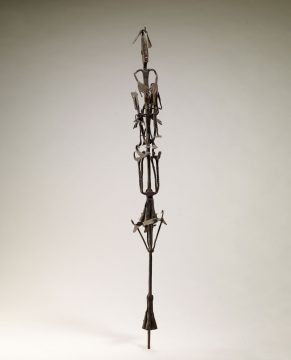 Healing powers. A skilled Yoruba blacksmith crafted this iron staff, with its complex interplay of human and bird motifs, for a priest of the gods of healing, Ọ̀sanyìn and Erinle. In Yoruba culture, birds symbolize both ancestral mothers and the power of good to overcome evil.

The additional human imagery may refer to Ògún, the god of iron and the patron of anyone using metal tools or machinery. By providing iron blades to cut through the forest in the search for medicinal plants, Ògún facilitates the priest’s work.