How have works of art, artists, and their ideas traveled? 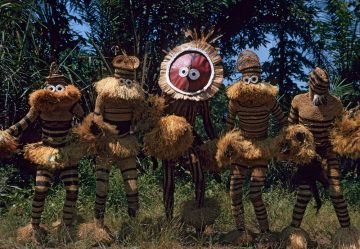 Objects and ideas move. Throughout history, few of Africa’s arts have been idle—they are performers, in any locale. Even now, musical instruments vibrate with sound during performances; masquerade arts dance in multisensory settings; stunning weights and currency objects circulate along trade routes; sculptures are marched in processions or manipulated to reach their full capabilities; paintings are loaned on exhibition; and videos flicker across time.

Africa’s artists cross borders and their influence travels. Individuals and communities migrate, follow commercial opportunities, and share ideas, materials, techniques, and styles. These works of art reflect such ongoing journeys across time and space—and move us in the here and now. 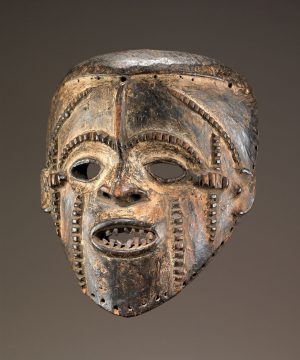 Style on the move. Despite its distinctive depiction of diagonal scarification lines, the source and use of this mask is difficult to pin down. It features a blending of styles and originated along the Benue River in Nigeria, an area where the arts move across ethnic divisions and between several men’s associations. It is likely that this mask was once used for entertainment or social order, or at funerals for members of a men’s society, though it is no longer possible to know with certainty. 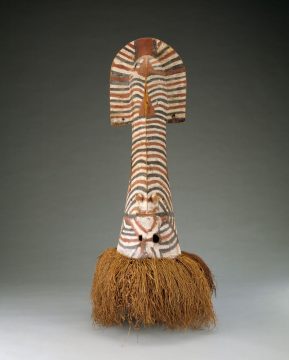 Danced at the new moon. Visual references to sky, earth, nature, and culture come together in this mask, which was danced to celebrate the rising of the new moon, as well as at funerals, marriages, and other worthy occasions.

John Noble White, a Methodist missionary at Minga, in southeastern Congo, collected it in 1924. He photographed the masquerade in performance with vulture and guinea fowl feathers protruding from its crest. Its costume included the fiber ruff still attached to the mask, a fiber skirt, and a leopard skin. These elements of the wilderness may have referred to local emblems of power. 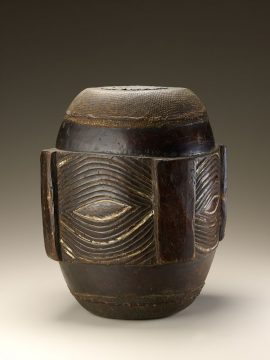 Imagine its beat! The tightly stretched reptile skin of this drum once thrummed with rhythms in the region of Kinkondja, a Luba town in the Lake Upemba region of Congo. Its compact shape and elliptical eyelike patterning—much like the painted eyes of the Tetela mask—is similar to the masks its music may once have accompanied. Its form has the appearance of two highly abstracted human faces with protruding vertical panels evoking the nose and ears. 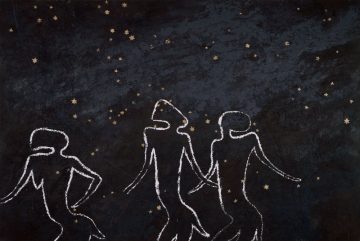 Following a starlit path. A Khoi San myth recounts how a girl dancing around an evening fire threw embers into the night sky. They persisted, becoming the wide, shimmering pathway illuminating the celestial firmament known as the Milky Way.

Inspired by this moving tale, South African artist Gavin Jantjes created this painting as part of the series entitled Zulu, meaning sky or heavens. To evoke movement, Jantjes drew upon the figurative style of southern Africa’s ancient rock paintings and created a work so compelling that it has traveled to four U.S. states for exhibition, appeared in five different exhibitions at this museum, and been used as the cover image for a book.