The ornaments and decorative objects found in homes of the Swahili Coast feature cultural strands from near and far. Given the emphasis on cosmopolitan worldliness in local worldviews, people have long collected imported luxury goods for display in their homes. This culture of things pays tribute to the ability to travel and to make the exotic one’s own. Those who want to present themselves as sophisticated city residents cultivate a multilayered aesthetic, fusing objects, forms, and materials from many sites connected to East Africa via its many trade routes.

Exotic objects have been collected in this region since at least the 12th century. The interiors of merchants’ mansions dramatically visualized their ability to bring the elsewhere home. By the 18th century, as the Swahili Coast became increasingly connected to European economic systems, and cheaper imports flooded the local market, house decorations became even more theatrical and layered. Intricate lime stuccowork came to fill entire walls. Rows of miniature wall niches supplied spaces for the display of imported or locally crafted artwork, such as a piece of porcelain, a copper bowl or box, ornamental tableware, or even a single elegantly carved spoon. Each niche functioned as a framing device, focusing the viewer’s gaze on the ornamental beauty of exotic things. 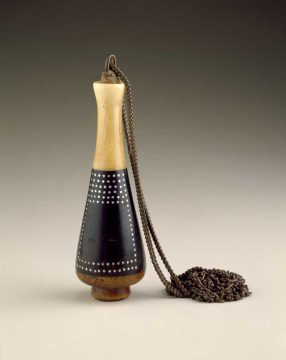 As early as the 16th century, travelers to Africa transported tobacco and snuff as items of trade and gift giving. In eastern and southern Africa, men and women historically carried snuff containers made from a variety of decorative materials. Collected in Zanzibar but likely made inland, this bottle inventively and elaborately combines imported and local materials—a long neck of bone, a dark-colored wood body with inlaid aluminum dots, and a lighter colored wood base—which reflect its cultural crosscurrents. 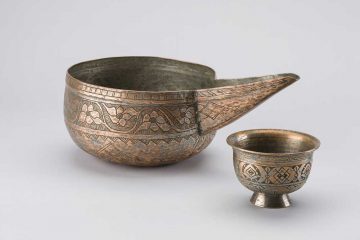 Omani artist
Nizwa, Ad Dakhiliyah Governate, Oman
Cup with geometric and lotus surface design
c. late 19th to early 20th century
Copper, tin
Bait Al Zubair Museum, Muscat, Sultanate of Oman, SAHBOI 197
Copper and brass vessels were used in Omani and other coastal Indian Ocean households for everyday meals as well as for more lavish feasts, such as those celebrating a wedding, the birth of a child, or a religious event. Indeed, the preparation of sumptuous meals and other grand gestures of hospitality remain important aspects of sociality and displays of respectability throughout the region.

Hinged lidded containers were used for halva, a sweet gelatinous delicacy made from clarified butter, sugar, and tapioca and seasoned with cardamom, rosewater, almonds, orange blossom, and other fragrant flavors. Preparations of mounded rice, meat, and fish garnished with myriad sauces and condiments were served on large copper platters. Spouted vessels were used for rinsing hands after a meal; on special occasions, silver or brass dispensers, such as those nearby, held rosewater for sprinkling onto diners’ hands and heads.