Why are artists’ names not always known?

The reasons we do not always have an artist’s name are varied. Sometimes, it is because the individuals who collected the works of art did not ask for such information. At other times, it is because multiple hands created the artwork or because the object was considered to be divinely created. Nevertheless, by returning to communities, carrying out careful archival research, and analyzing visual details closely, it is sometimes possible to identify an artist retroactively.

An artist who might, in some instances, be commissioned to create sacred works of art in seclusion, might also carve hair combs, heddle pulleys, and other public art forms to advertise his skill, personal style, and name. In cases where it has been impossible to ascertain an artist’s name, it has still been possible to ascribe a body of work to an individual hand or workshop, as with the sublime headrest attributed to the Master of Mulongo. In instances where we do not know specific artists’ names, the museum makes every effort to at least determine their cultural affiliation as a placeholder for the artists’ agency and identity.

Sculptors were typically men. Women were also active artists working in a range of materials across the continent. Yet, their arts are not always represented in the same numbers in international collections—perhaps a legacy of the predominance of men among earlier collectors and museum professionals. 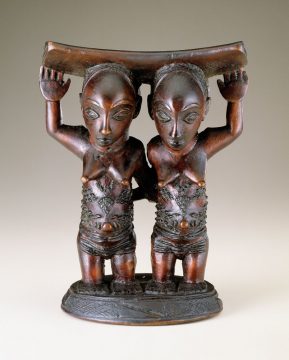 Artist of dreams. The exquisite details of the two figures with interlocking arms, ornate hairstyles, and tantalizingly tactile torsos on this headrest connect it to the Master of Mulongo, whose atelier was near the Middle Lukaga River in the late 19th century. Headrests are pillows that preserve intricate hairstyles during sleep. The female figures may represent vidye—the twin guardian spirits of Luba royalty—that connected their owner with spiritual realms while dreaming. 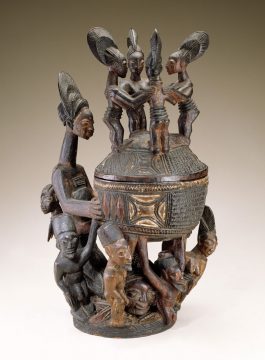 Remembered for his daring. Ọlọ́wẹ̀ moved to Ise to serve the àrìnjalẹ̀ (king) as a messenger. Although the details of his sculptural training are unknown, Ọlọ́wẹ̀ likely learned the Yoruba artistic canon and perfected his skills through apprenticeship. He became a master artist at the palace, and as his fame grew, other Yoruba leaders commissioned architectural sculptures, masks, drums, and other objects from him.

That Ọlọ́wẹ̀ was an innovative and virtuosic, even daring, artist is demonstrated in this bowl. Except for the lid, the entire sculpture, including the bearded head below that moves freely, was carved from a single piece of wood. This is also the first time four dancing girls appear in Yoruba art.