There is no painting without drawing and there is no shape without line, in the end all images can be reduced to lines.

Did you know that Khartoum, the capital of Sudan, has been a leading center of 20th-century modern art?

Sudan’s School of Fine and Applied Arts (a prominent art program within the Sudan University of Science and Technology) and the University of Khartoum (formerly Gordon Memorial College) have trained many leading international artists. In 1945, Osman Waqialla graduated from Gordon Memorial College—to which he would return as a teacher—to begin his influential explorations of Arabic script. In the 1960s, two of his students, Ibrahim El-Salahi and Ahmed Mohammed Shibrain, expanded on Waqialla’s experiments and founded the Khartoum school—an art movement in which Arabic script was distilled into abstract and figurative forms. El-Salahi eventually left Khartoum, gaining international acclaim and becoming the first African artist with a retrospective at the Tate Modern (2013). Shibrain and Waqialla remained in Khartoum, where they became influential teachers—Shibrain, at the School of Fine and Applied Arts—as well as prominent artists.

Mohammad Omer Khalil and Mo Abarro were both graduates of the School of Fine and Applied Arts, which trains artists in a range of media. Recognized as a master printmaker, as well as a painter, Khalil graduated in 1959. Abarro, by contrast, was known for his work in ceramics and glass. Both artists emigrated from Sudan but their work continued to draw upon their early influences in Khartoum. 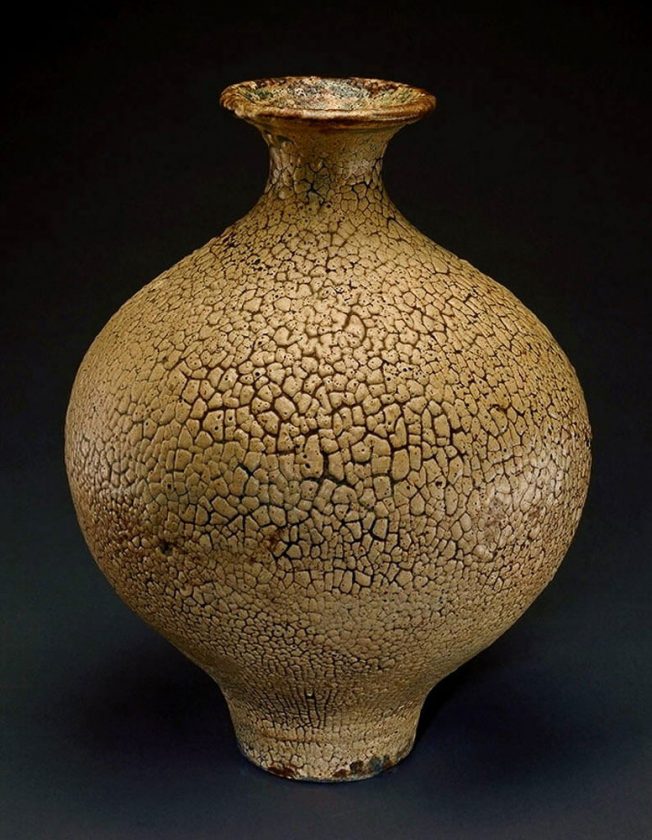 Talent for textures. Early in his career Mo Abarro drew from his knowledge of ancient Sudanese practices as well as his university training to design utilitarian pots with delicate glazes. His later forms, like this vessel, are the result of bold experiments with new slips and surface treatments.

Abarro formed the hollowed sphere of this pot with its tapered ends by building up coils of clay and then smoothing the walls, which he coated with a series of glazes. After they dried, the pot was fired in an electric kiln. To produce its reptilian surface, the pot was dipped in a magnesium slip and fired again.